Some time back in March, I stumbled across Ben Rogers’ (@BenRogersEdu) blog post about using the Singapore bar model in Science (Ben’s is here), and the conversations Damien Benney (@Benneypenyrheol) was having on Twitter about his experiences of using bar models in Science. At the time, I was teaching electricity to my Y8 ‘support’ group who were struggling with some of the mathematical concepts in this topic, and I was searching for a way to support them to carry out calculations successfully. I used Ben’s example questions for calculating current in parallel circuits from his booklet, and the ‘I do, we do, you do’ modelling approach advocated in this, and it was a bit of a revelation – my students found the calculations very easy and had no problems following this method.

A little while later, I was observing a PGCE student teaching my Y9s how to write ionic formulae – most of them got it very quickly (they’re a high attaining group) and so didn’t need any support, but one of the quieter students was really struggling with the concepts and wasn’t willing to say so in front of the rest of the class. Without really thinking about it much, it occurred to me that the bar model idea could be used to represent the balancing of charges, so I drew this in her book and talked her through it:

I asked her to then complete an example and explain to me what she was doing, and although she wasn’t very confident in her response, she did get to the correct answer. I got quite excited about this discovery, so I shared it on Twitter, and Damien Benney has now also successfully used it with his students:

As Ben said in his talk at researchED Rugby, the important thing about the bar model is that it is scaffolding the algebra in order to help the students think about the science rather than the maths (I’ve paraphrased here…). I like this example for ionic formula for that reason – it is very easy to get to the correct answer, so students think more about making sure the positive and negative charges balance out in order to get to the correct formula. It also gets away from the method I’ve seen so many people using where you swap the charge from one ion to be the subscript number for the opposite ion in the formula (see below) – this method teaches them a (pretty rubbish) way to get to the answer (most of the time), but doesn’t give them any sense of the science behind it.

More recently, having read through Pritesh Raichura’s (@Mr_Raichura) excellent blog posts on procedural and declarative knowledge (based on his #CogSciSci talk) and on equations in science, I decided to create some handwritten questions and use careful modelling and scaffolding to help my Y10 ‘bottom set’ Chemistry class to learn how to write ionic formulae. We had already done a lot of practice questions on identifying the charges of individual ions and using correct notation in Chemistry in order to prepare them for this next step. I used the visualiser and lined paper to show them how to layout their working, and modelled several questions requiring different numbers of ions to show them how to proceed, getting more and more input from them with each worked example. They then completed this series of questions independently and were (mostly) very successful: 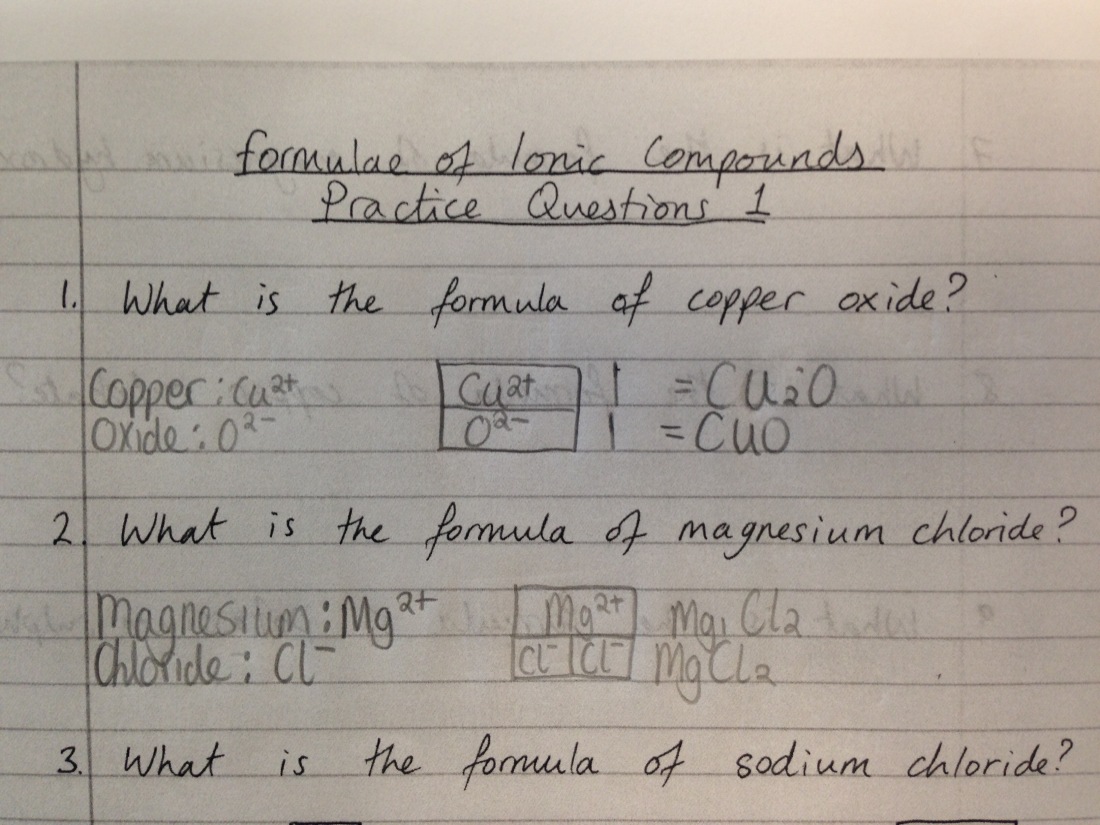 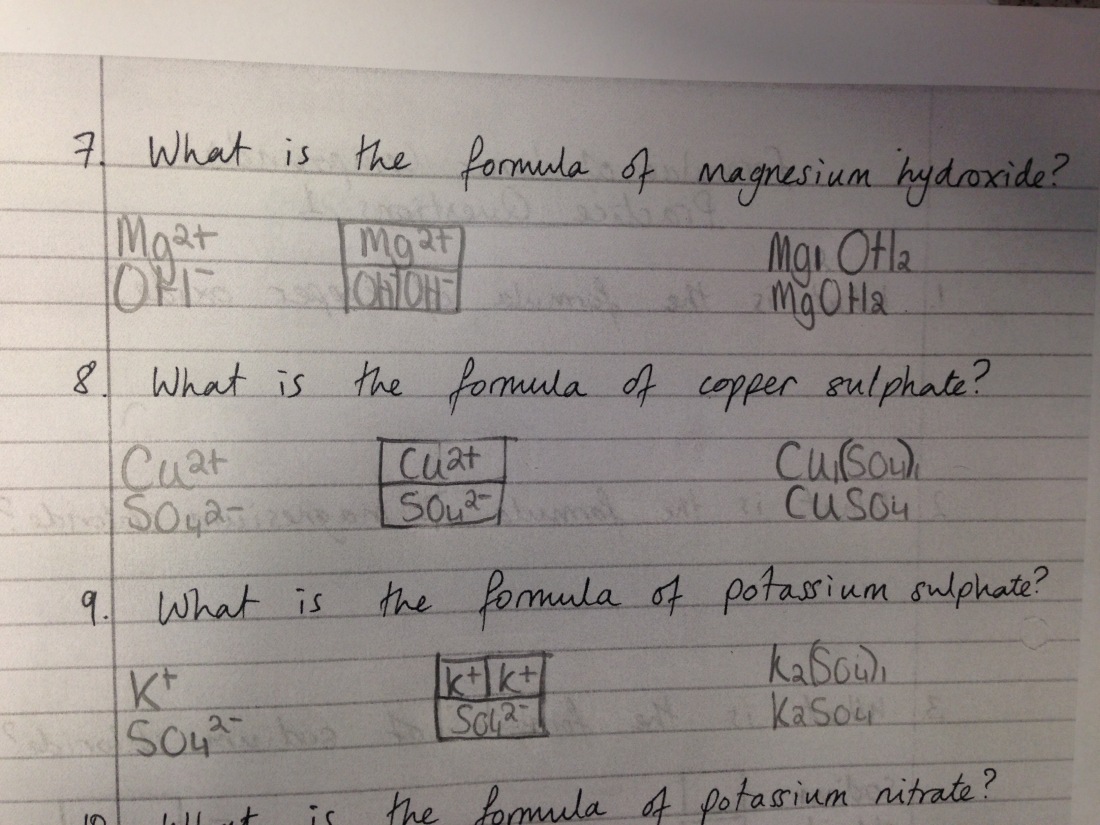 I’m happy to share the question sheets if anyone wants them (haven’t yet worked out how to link the document to this blog post).

The system I used was inspired by Pritesh’s layout for science calculations:

Step 1: identify the formula of each ion in the compound, and write it on the left.
Step 2: Draw a bar for the positive ion – make it wider if it has a bigger charge.
Step 3: Draw a bar for the negative ion underneath this – the width of this bar must be roughly proportional to the positive ion (e.g. a 2- ion would have a bar twice the width of a 1+ ion).
Step 4: Make the two bars equal widths (and therefore equal charge sizes) by adding extra ions as needed.
Step 5: Write next to the bars how many of each ion were needed.
Step 6: Write out the ionic formula using these numbers, including any 1s.
Step 7: Rewrite the ionic formula, removing any 1s.

I found that each of these steps was necessary to make sure my Y10s didn’t miss anything. It was particularly important to write the number of ions next to the bars, because otherwise they wanted to transfer the charge numbers directly to the ionic formula. I think traditionally you’d probably do step 3 and 4 in the opposite order, and I don’t think it would make a difference – I just happened to do it this way in the lesson.

Interestingly, there have been a few comments via Twitter and at researchED Rugby, saying that this method isn’t really a Singapore Bar Model and that it may be problematic in Chemistry teaching, so I just want to comment on these points here too.

Here is an image of what ionic formulae should really look like if we use the bar model in it’s original form:

Effectively, the positive ions and the negative ions add up to make the total charge of zero in the ionic compound. You can immediately divide the bar underneath the compound name into two – half the total will be your positive ions, and half will be your negative ions. The problem with this is that it becomes conceptually more challenging if your students haven’t got a good grasp of positive and negative numbers, and then they can also get very confused about the total bar (‘copper chloride’ in the above example) as it is representing zero, but is wider than 2+. For this reason, I chose to alter the model slightly to make it conceptually more straightforward to understand (after all, this is the whole point of using the bar model in the first point).

The second issue raised was the fact that this could lead to misconceptions surrounding the idea of ionic compounds as individual molecules, rather than the formula representing the ratio of ions within a giant lattice structure. This is where it’s important to give very clear explanations when introducing this approach. My class had already studied giant ionic lattices at this point (in fact, they had theoretically ‘done’ ionic formulae before but without much success) – when introducing this method, I explained that when we work out the ionic formula, what we are actually calculating is the ratio of ions within the giant ionic lattice of this compound, and reminded them that within this lattice there would be massive numbers of each ion in order to form even the smallest crystal.

There was also some concern that this method was too simple, and perhaps some students are capable of working this out without it and these students would be better off being stretched further etc. etc. – of course this is true! This method is designed to scaffold the thinking process for students struggling with the maths. I wouldn’t use it with all my classes, but I would certainly use it with those students who are struggling with the maths.

As an aside: I suspect there could be other issues with using this model for ionic formulae – and I would welcome comments regarding this. I’ll reveal now that I’m not actually a Chemist… I’m a Biologist who has an A level in Chemistry, so my subject knowledge is not as strong as a Chemist’s will be and therefore there might be issues further down the line that I haven’t thought about…

5 thoughts on “Developing a bar model for ionic formulae”